I had a pretty mixed experience yesterday at the Bangkok International Film Festival. I only saw two movies, one shitty and one great, but mostly kept wishing I could re-watch I Killed My Mother. Tonight is my final film, Mammoth, which will probably play to a very packed house. It’s been really fun to attend a major film festival, and a cheap one at that (ended up being ~$2.60 per film). 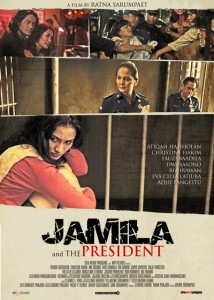 Synopsis: “Jamila is a prostitute serving a life sentence behind bars. She surrenders herself to the authorities after admitting she killed a high-ranking minister, and refuses to be represented by any lawyer or request a plea to ease her sentence. The controversy spreads all over the nation, followed by a reaction from a militant group forcing the government to give the death penalty to Jamila. The prison slowly reveals JamilaÃ¢â‚¬â„¢s story: she is a victim of child trafficking, a crime that has become a custom in many places. Jamila represents millions of children who has been sold in the name of poverty and the lack of education.”

Weighty, important subject matter does not necessarily mean a weighty, important film. Jamila and the President is overwrought, daytime soap opera material. Good production values can’t hide the fact that there’s nothing at its core except a poor script overacted by melodramatic people. Sarumpaet adapted the screenplay from her own theater play and this is very obvious in a few key scenes that don’t translate well to film at all. Most characters act illogically and unrealistically, and by the end I cared little about or for any of them. My bad experience with this movie was not helped by subtitles that were poorly translated and written in large, Comic Sans font.