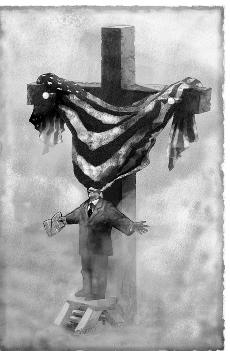 In Part One of this series, I sketched the outlines of the argument against Christians voting. The goal was to give a defense of principled non-participation, and should not be confused as advocating apathy and/or laziness. Likewise, in this post I won’t address silly, specious arguments for voting, such as ones from civic duty or obligation.

To kick things off, I want to quote Ran Prieur:

A common argument against voting is that it trains you to think that working within the system is the best or only way to make a better world. My answer is: could you set the bar for yourself any lower? That’s like not watching any commercials because then you won’t be able to stop yourself from buying the product. If you don’t think you can vote while keeping a healthy mental distance, now would be an excellent time to learn. Your vote is not a precious flower to be given only to the one you love; it is a cold tactical decision, and collectively, it does make a difference.

Prieur hits on two things I want to highlight. The first is this idea of “healthy mental distance” and “cold tactical decision.” All throughout this essay I am going to continue assuming that politics is corrupt(ing), that power plays are unChristian, that our electoral process is beyond embarrassing. So everything henceforth operates under the assumption that if (big if) we vote, we vote with terrible fear & trembling. We’d be voting with acute self-awareness, reflexivity, humility, and perhaps even with a prayer of forgiveness.

The second idea in Prieur’s paragraph is this idea of purity, in which non-contamination becomes an idol for the leftist Christian (Note: Prieur is not one, just FYI). This is the same problem the fundamentalists have: if I don’t hang out with thieves & prostitutes & rock ‘n rollers, I won’t be tainted by their sin. The principled non-voter is saying something similar: if I don’t participate in xyz, I won’t be complicit in the system. Now I have, over the years, shifted to more institutional notions of sin & depravity, so I certainly think there’s something to “opting out” as much as possible. The confusion is in thinking it is a) wholly possible, and b) a sort of salvation in its own right. Right now, as I write this, wars are being fought in my name and, worse, in the name of my God. Hear this: not voting does not change this fact. My complicity in that violence is not entirely contingent on whether or not I punched a ballot. Furthermore — and I here I love Prieur’s line about the “precious flower” — the fact that those we vote for are fallen is not itself a reason to abstain. There has to be something more here (and in aggregate, perhaps the arguments in Part One do add up convincingly). In my “anti” arguments I appealed to “symbolic weight” as a reason for abstention. Yet I think it could certainly be argued that I attributed much too much weight to that symbol. Is it really the case that I am now “defiled” for casting a vote, yet reliance on the state in hundreds of other ways is less defiling? On one hand, because I want us to live more attentive, more attuned lives I think we ought to weight more decisions more heavily, avoiding the flippant, thoughtless consumer culture around us. Yet we have to avoid over-burdening things — avoid “false equivalency” — where anything less than total, absolute (I’d argue, impossible) purity is seen as the only option.

Lastly, let me depart from Prieur and discuss the biggest shift in my thinking on this subject. For a long time I had been primarily approaching this subject from a very individualized, self-centered perspective: am I guilty of the sins of empire by voting? am I sufficiently setting myself apart? am I condoning a horribly broken process? am I giving credence to worldly ways of conducting affairs? am I implicitly denying the sovereignty of God? I’ve had to slowly own up to the fact that the argument for voting has little-to-nothing to do with me. The meaning of any given election is significantly, profoundly different for me as an educated, white, male Protestant. My privileged status in this society means it is extremely hard for me to fail — and don’t doubt for a second that recognition of this fact has induced no small amount of existential vertigo in recent years. Now technically I make less than the “statistically expected” income, but I am far from the poverty line and far from truly struggling (those two lines don’t always sit close to one another). I read an article some time ago from a white woman who set out to count the myriad ways in which she automatically had a leg up over a black woman of similar background. It’s an intriguing exercise because it’s so damn unpleasant. The myth of a meritocracy is so ascendant in this country that it’s pretty painful, and rare, to openly admit the many ways in which one has either gotten extremely lucky or been gifted extreme advantages without our having anything to do with it. I’m reminded of one oblivious WASP who conducted a post-college experiment in starting with $0 and living on the streets, seeing whether he could turn nothing into something. If I recall correctly, within 6 months he had a job, a modest apartment, and an old beater car: see, it’s so easy! If I can do it, anyone can! If you can’t, you just aren’t trying hard enough! The astonishing blinders it takes to think such things are really something to behold. That individual was completely ignoring the dozens, even hundreds of ways, his bourgeoisie background prepared him to “make it” (on terms his own demographic defines) in a country largely run by people of his same race, socio-economic background, worldview, etc.

I go through all that to point out what should be largely obvious: what class you are in America does play a large role in how much these biennial political games affect your life. Not voting, because of how it concerns me, ignores the role the elections, which will happen regardless, will have in shaping “the least of these” among us. The propertied, power-mad classes whine about this or that policy because it might mean $150k less in their savings, one less trip to the Caribbean, one less house on the Cape, one less Benz in the garage. Meanwhile, the vast numbers of underprivileged in this country have to face giving up children because there’s no food & giving up their meager homes because there’s no chance of paying rent. Some years ago I faced the stark fact that many decisions in life boil down to whether one is going to side with the powerful or side with the powerless. I’ve opted for the latter. I’ve decided that the onus is on the power(ful) to justify itself/themselves, not for the underclasses to justify why they want “luxuries” like clean water, fresh food, proper shelter, and adequate healthcare.1

Sadly, our elections do not provide the option of voting for one party that works for the marginalized and one that works against them. Some conclude from this that both parties are virtually indistinguishable and that voting has no real effect in the end. However, while it is true that both parties serve the same employer (the corporatocracy), each employee is not equal. To be sure, the Democratic party is a spineless group of ineffectual sleazebags… but they, unlike the Republicans, are not waging an all-out war on the poor. Democrats should be absolutely ashamed of their acquiescence to the current racist, xenophobic, imperialist agenda, but their impotence does not excuse the warmongers setting this agenda in the first place. For their absolute commitment to moronic, draconian drug policies that overtly target the poor; for their blind ideological dedication to long-discredited economic policies; for their zealous hatred of the Other; for their eagerness to wage wars unashamedly designed to further corporate profits; for their toxic, confused take on history & education; for their appalling rhetoric, utter shortsightedness, anti-intellectualism, technocratic stupidity, and on and on… for all these reasons and more, I feel voting for the GOP is almost always a victory for the privileged. It does not matter if Republican Bob is personally or individually better than Democratic Jane because the former still belongs to a bloc passionately dedicated to furthering inequality in all its forms.

Thus this argument for voting stands on the shoulders of all those historically denied the power to vote, for those given suffrage but denied power is all other arenas, for those who bear the brunt of the consequences of our leaders’ carelessness. If voting then “taints” me — marks me guilty & makes me complicit in a violent, oppressive system — then I take that hit on behalf of my neighbor, especially the neighbor who doesn’t have the luxury of ignoring (as I, and almost all readers of this blog, do) the thieves in D.C. and their taskmasters on Wall St.

——————————————————————————
1 I held off publishing this for a while over discomfort over some of my own language (throughout this post actually). I thought of doing a self-rebuttal, then a rebuttal to the rebuttal, and then settled for this meager footnote. Suffice to say that I want to be very careful with anything that can be perceived as “liberal white guilt” and/or a “white savior” complex. I’m very sensitive, and sympathetic, to a Foucauldian critique that might object to condescending phrases like “giving voice to voiceless” or “empowering the powerless.” I think the crucial point here is that I’m advocating solidarity with the marginalized, not salvation-from-outside for the marginalized. The classes typically excluded from public discourse or from usual channels of power are capable of resistance on their own, and I merely aim to stand up with them, not for them.